Casa Bacciana lies in Zona Bacciana  within the comune of Montone, Umbria in the upper Tiber valley. Travel to and from the area is straightforward:

By Road: Montone is just 5 minutes off the E45 superstrada which  links the Venetian coast to Rome.

By air: Montone is served by Perugia airport (Sant Egidio next to Assisi)) which is less than 30 minutes from Montone by car.  In summer, there are daily flights form London Stansted with Ryanair but can be less frequent in the winter months – please check with Ryanair.

Alternative airports are Ancona, Bologna, Pisa and Rome – all about 2 hours or less from Montone. A choice of airline companies and UK airports is available. 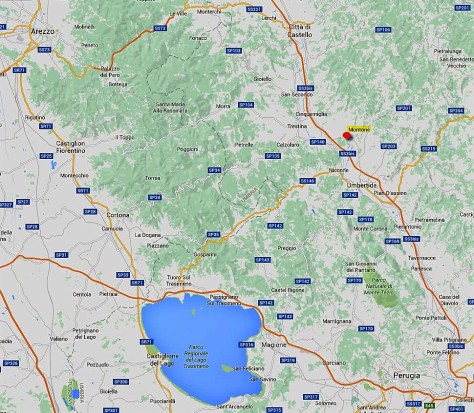 A lovingly restored ancient farmhouse in Umbria, the Green Heart of Italy