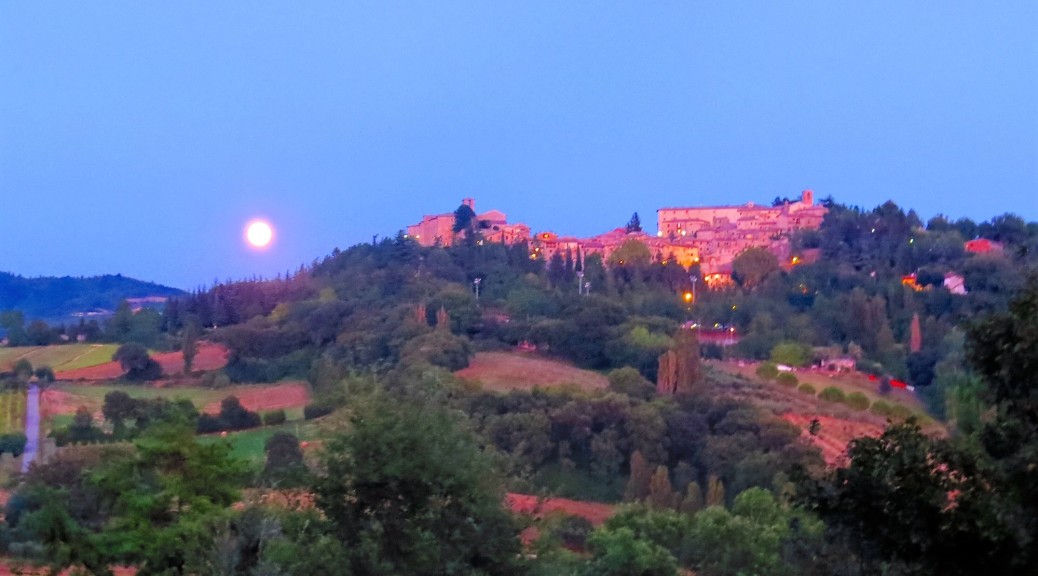 Montone, our village (“comune” in Italian) , is minutes away by car and is a 30 minute walk. A quintessential Umbrian hilltop medieval  village Montone  has been officially designated as “Uno dei Borghi piu belli d’Italia”, in other words “one of the most beautiful small towns in Italy, and as such has been awarded the Orange Flag from the Touring Club of Italy.

The Huffington Post featured Montone as one of the top 10 Village destinations in Italy.

Although it is only five minutes from the E45 (the major North-South motorway through Umbria) and only half an hour from Perugia, Montone is very much off the beaten track. It is situated on an imposing hill, surrounded by nature and meticulously cultivated land, in a beautiful panoramic position between the tributaries of the Tiber, the Carpina and the Lana rivers. The historic centre of the village is contained within ancient, very high and imposing defensive walls, with huge solid blocks at the bottom, built into the very rock on which the village stands.

The village was founded at least 1,000 years ago and in the 10th century was a fortress for the noble del Colle and del Monte dynasties. In the 13th and 14th centuries, the Fortebracci were the dominant dynasty  in the village, and have given their name to the central piazza and their symbol of Aries – the ram to the village’s coat of arms. Braccio Fortebraccio (born 1368) was a renowned commander and warrior who brought glory to Montone. The montonesi, those who were born and live in Montone, are very proud of their heritage; they are warm, friendly and welcoming people, who are only too pleased to share the beauty and tranquillity of their village with outsiders lucky enough to stumble upon it.

Montone  is really situated on two hills making the village a saddle shape:  from a distance its silhouette is unmistakeable. O n the western side is the cloistered Gothic Church of San Francesco which was contructed in the 14th century and now houses the town’s museum. On the other side is the Collegiate Church of St Mary, in which can be found a sacred relic –  the Santa Spina, a Holy Thorn from Christ’s crown of thorns, which is publicly displayed every Easter Monday.

A walk around the medieval village through the winding streets inside within the walls presents you with an enchanting network of stone steps, narrow alleyways and graceful arches, high shuttered windows looking down into the street or out across the countryside, unusual doorways leading into tucked away apartments and houses and picturesque nooks and crannies. The jigsaw of tiled rooftops, the hidden balconies and roof gardens, are a feast for the eyes and as you walk the pattern of the neat stone cobbles beneath your feet is as lovely as a carpet.

The climb up the flight of steps to San Francesco brings you to a peaceful, open courtyard with a magnificent view of the countryside. Here you can decide to take a detour into the church itself for a look at the 15th century frescoes. From different positions in the village, you can stand and look towards the mountains of the Marche, or towards Tuscany and across the Valtiberina (Valley of the Tiber) and the countryside of northern Umbria.  One visit to Montone is never enough; there is always something new to see and the village changes its character constantly – at different times of day and in different season.

The three rioni ( neighbourhoods or wards) that make up the town are accessed by three gateways:  Porta del Monte, Porta del Verziere, and Porto del Borgo Vecchio. All the residents of Montone belong to one of these three neighbourhoods and passions run high in August when the neighbourhoods compete against each other in a variety of ways – including a medieval costume pageant , archery and flag waving competitions – in the Ferragosto holiday week which celebrates the Donazione della Spina, the giving to the village of the Holy Thorn by Carlo Fortebraccio in 1473.

Piazza Fortebraccio – with the town hall, post office, shops, bars and restaurants – is at the heart of this lively and friendly little town. Montone has several excellent restaurants , two grocery shops, a butcher’s, a newsagent’s, a bank with cash machine , a pharmacy, gift and clothing shops, and a excellent bakery/cafe, which also does takeaway pizza. (See below for more information about bars and restaurants)

Montone hosts an international film festival in July, which draws many visitors to the village for several evenings of film showings in Piazza Fortebraccio

Montone is a village for all seasons and reasons:  whether it’s just to pick up a few provisions, or for a coffee, or breakfast or lunch, or for a first-class dinner as part of a magical evening, or an icecream and a chat in the piazza with the locals and other visitors – where the children can run around and play –  whatever the reason for your visit to Montone, it will always be an uplifting experience. It’s a difficult place to leave!

Horse riding in Montone and around:

The village has an excellent riding school, Natura Cavallo, located just outside the walls on the road to Umbertide, on Via Case Sparse 28. Lessons are available for young learners and more experienced riders can book to join rides in the beautiful countryside around.

Bar Aries –  lively bar in the main piazza and a main hub for locals; outdoor tables with umbrellas; excellent coffee, pastries and sandwiches; wine bar; delicious home-cooked pizza also available; very friendly and welcoming staff; the place to get a feel of Montone.

Ristorante Taverna del Verziere  – located on Via dell’Ospedale near the main piazza; good, reasonably-priced local dishes served by friendly staff in an attractive setting; a lovely terrace for summer al fresco dining, looking out over the countryside; sometimes closed in the winter months.

Restaurant Ostaria-Pizzeria at Hotel Fortebraccio – located on Via dei Magistrati, a little out of the historic centre;  international and traditional Umbrian cuisine, served in a modern and comfortable dining room; outdoor terrace with lovely views over the hills; good pastas and pizza.

Erba Luna – located at Parco delle Rimembranze right at the top of the village; a popular but more pricey restaurant housed in part of the former residence of Prince Braccio Fortebraccio; excellent food, with home-cooked bread and pasta; a fabulous antique interior with vaulted ceilings, and a romantic terrace for outdoor dining; you might see some famous faces at this restaurant.

Locanda del Capitano – actually a small, high-end bistro hotel, but has a very “special occasion” restaurant which is a memorable if expensive experience; located on the Via Roma just near Piazza Fortebraccio in a lovely old building; food for devoted gourmands by celebrity chef Giancarlo Polito whose cooking is authentic Italian with a twist, always using local, fresh ingredients; outstanding wines from regional and national producers.

A lovingly restored ancient farmhouse in Umbria, the Green Heart of Italy